An apron hangs in Michael’s kitchen. Stitched into it is a patch that says, “Michael is not only a great chef, he is a culinary artist!” Though he admits he’ll never wear it, Michael hangs the apron with pride. It was a gift from one of his neighbours at Strathcona Place. Sharing his culinary skills is something Michael takes a lot of delight in.

“Right from a young age, my siblings and I were taught to cook, clean, all for ourselves,” says Michael. “We were taught to be self-reliant with the things we had and that sense of self-reliance has certainly helped me be able to call this place home.” 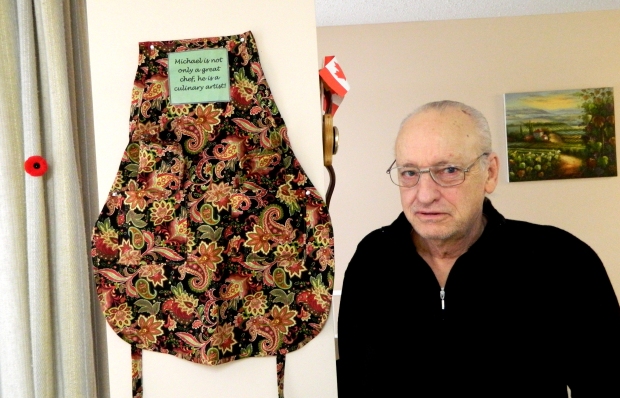 Michael knows that a space like his in a Manhattan rental market would easily cost around $2,000 a month. Thankfully, Michael lives in Edmonton and in a GEF Seniors Housing apartment where the rent is geared to his income. For most people, 325 square-feet is not a lot of space. For Michael, it’s a perfect fit.

Before moving to Strathcona Place, Michael owned a house in Edmonton’s west-end. He admits it took him around six months to settle into his new apartment but now can’t imagine living anywhere else. The smaller square-footage wasn’t a deterrent at all. In fact, it was almost a selling point for him.

“I was able to see the space empty before I moved in,” Michael explains. “I took only the things I wanted from my house. I then measured out the space I had to work with and found furniture pieces that worked within the space.”

“I have a friend who lives in a 3,000 square-feet house,” Michael says. “Every room is just full of stuff. There’s a craft room, a man cave, and it’s still not enough room for him and his wife. In Japan, an apartment the size of mine would be big enough for a whole family. What I’ve learned is the more space you have, the more money it costs.”

Michael acknowledges that many people he knows have difficulties parting with material goods and keepsakes. He notes that this could be partly because of either living through the Great Depression or having parents who did, so the need to hold onto things increases with that frame of reference. He also notes, though, that growing up he didn’t have many of the modern conveniences that so many take for granted today.

“The house I grew up in didn’t have TV or even electricity,” Michael says. “If we wanted entertainment, we had to go outside.”

The idea of leaving your space to connect with the community is something Michael still lives by. He notes that many of the people he knows in Strathcona Place get together regularly for games and for potlucks (where he shares some of his well-executed home-cooked delights) and he spends plenty of time walking in the neighbourhood. He explains that the conveniences in the community such as banks, grocery stores, and clinics are so easy to walk to, he doesn’t even own a car anymore.

“Everything you could need is right here, even the bus routes along here are some of the best in the city,” says Michael. “A monthly pass for the bus is $15. You can’t drive anywhere for that cheap.” 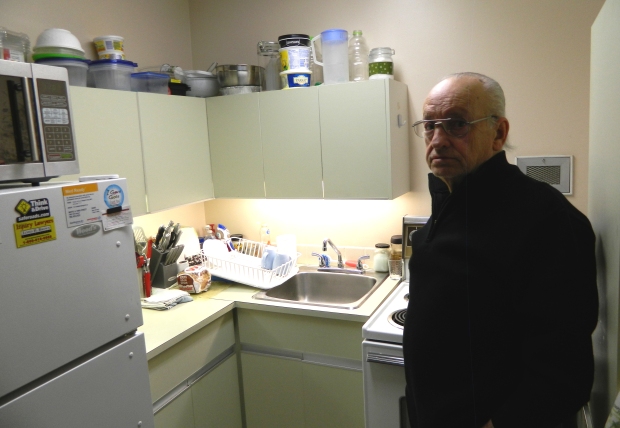 Not the only tenant of Strathcona Place to embrace the paired down lifestyle, many of Michael’s neighbours live in the same square footage as he does without sacrificing any passions. He points out one neighbour utilizes modular fold out tables to create a crafting space. Even the University of Alberta students who also call Strathcona Place home live in the smaller bachelor units and continue to be a welcome addition to the community inside the building.

After the six months it took him to adjust to his new living environment, he feels fully connected and comfortable where he is. He understands that the transition is stressful for many to embark on but also points out that it’s completely worth it by the end of the process.

“The staff here are amazing and do such great work to keep the building safe and so no one ever has to look over their shoulders,” says Michael. “It really is like a small town. I’m never left wanting. This is the perfect space for me and I have no plans to ever leave.”

One thought on “Michael’s Apartment”