Duane Krautman remembers getting the call that someone had collapsed in the 12th floor laundry room of Ansgar Villa. He was working on the 10th floor and didn’t hesitate to skip the elevator and run up the stairs once he understood how dire the situation was. He arrived to find Mary Benjamin on the floor, unresponsive and not breathing. He performed CPR on her for more than 12 minutes while he waited for the ambulance to arrive. Benjamin survived this ordeal and never hesitates to give Krautman a hug any chance she sees him, proudly declaring that he saved her life. 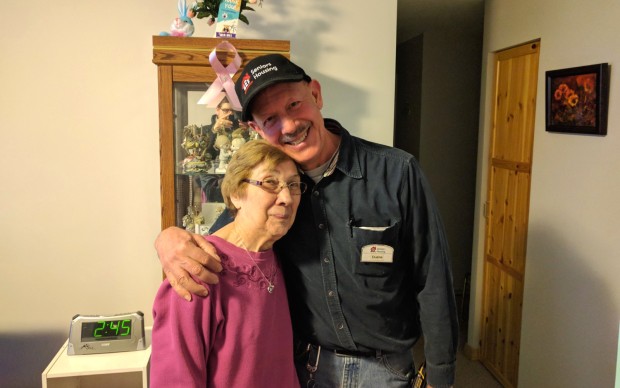 For a lot of people in Krautman’s situation, this would be a taxing and emotionally draining experience. Krautman remains relatively unfazed by the experience and actually went right back to work after the ambulance took Benjamin to the hospital. In fact, not a lot fazes Krautman at all. After all, it must be hard to shock someone who spent the first half of his life running New York’s second largest funeral home.

“Most people I know say I’ve lived five lifetimes,” says Krautman with a laugh. “Working here at Ansgar Villa is what I wanted to do for retirement and I love it here.”

Krautman’s journey that eventually landed him in Edmonton starts with him at 17 years old, speaking to a career councillor about what options he had once he finished high school. He remembers wanting to be an oceanographer, but once was told that he didn’t have good enough grades for his dream job, he let fate decide how his future would look.

“There was a big poster of a bunch of different careers on the wall,” Krautman reminisces. “I pulled out a pencil and threw it at the wall. I didn’t even look. Once the pencil stuck to the poster, I said I’ll just do that. The councillor looked at it and said I was going to be a funeral director.”

By 21, he was running the funeral home totally on his own and working on many high profile services, including members of the infamous Gotti family right up to John Lennon. In 1999, he was featured as the main topic of the award-winning documentary short “The Last Guy to Let you Down” from director Rolf Gibbs. After 27 years and working on 7,349 cases, Krautman had to retire because of growing health problems. His retirement is what led him to Canada.

“I arrived in Edmonton on April 1, 2000, to convince my girlfriend it was an April Fool’s prank,” Krautman explains. “I couldn’t stay retired for too long, I got bored way too quickly. I wound up taking computer science courses and working at BCOMM Computers before making my way to working with Boardwalk, and then finally with GEF Seniors Housing.”

Shortly after he was hired to work maintenance for Ansgar Villa, Krautman remembers walking through the hallways and thinking he heard a dog in one of the suites. Once he found where the sound was coming from, he realized they were calls for help. He entered the suite to find a tenant had fallen in the tub and landed in a way that had her suffocating. Krautman sprang into action and helped the woman clear her breathing and ensured she wouldn’t suffocate. For the rest of her time living at Ansgar Villa, she only referred to him as her hero.

“It’s just the way I am where if I see something that needs to be done, I just do it,” says Krautman. “Especially here, I know all 172 people who live at Ansgar Villa, this is like my home to me. If someone needs help, I help them. It’s how I would want to be treated if I lived here.”

The presence Krautman has at Ansgar Villa resonates with every one living in the building. He’s greeted loudly and cheerfully when he walks into a room with tenants meeting up for coffee. Tenants pull him aside to ask about fixing a couple of things and he listens with a concerned and compassionate ear. Nothing continues to faze Krautman as he lives by his policy of not panicking, not stressing, and keeping level headed.

“There was one time when my daughter was six and she fell into the river over by Servus Place in St. Albert,” Krautman explains. “I’m a fast swimmer, so I always told her that if anything like that happened, don’t panic and hold your breath and I’ll be there. After I pulled her from the river, she told me that’s exactly what she did and I was there for her. There’s not a lot I haven’t seen in my life, so when I see a problem, I just go and solve it no matter the situation.”

One thought on “Duane at Ansgar”