A little over a year ago, GEF Seniors Housing broke ground on Sakaw Terrace, the newest affordable seniors housing project for the organization and the first for the Mill Woods neighbourhood. The event was celebrated with appearances from Edmonton Ward 12 City Councillor Mohinder Banga, Provincial Minister of Labour Christina Grey, Provincial Minister of Seniors and Housing Lori Sigurdson, and with a message from the office of Federal Minister of Infrastructure and Communities Amarjeet Sohi.

For GEF Seniors Housing Director of Facility Management Doug Kitlar, the progress made on Sakaw Terrace over the past year has even surpassed his expectations. He explains that with the designers at RPK Architects and the contractors at Chandos all being invested in the project along with GEF Seniors Housing, the team is working collaboratively to find more efficiencies and creative ways to reduce unnecessary spending without compromising the overall building. 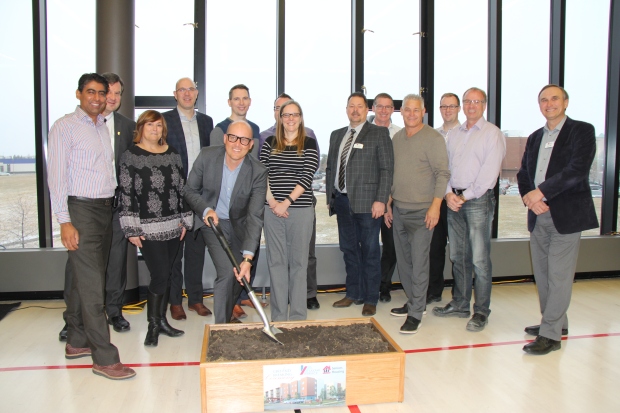 “Sakaw Terrace is being built on what’s called an Integrated Project Delivery (IPD),” says Kitlar. “What this basically means is that everyone has some skin in the game. The IPD contract has ten parties signed on plus GEF Seniors Housing. All ten of the IPD parties have put their profits on the line for the duration of the construction, which keeps everyone invested in finding those efficiencies and keeping everything on schedule. If the project comes in under budget, the IPD parties share in those profits. If the project comes in over budget, all parties share in those extra costs out of their profits.”

With an opening date pending in late 2018, keeping Sakaw Terrace on schedule has been of significant importance to Kitlar. He explains that the project did see some setbacks in its first year, including issues with the soil conditions at the building’s location.

“The soil at the Sakaw Terrace site is very moist mostly due to the fact we had a lot of rain over the summer” says Kitlar. “We had to dig deeper than anticipated in a few areas to find solid ground to build on, but the IPD process has brought everyone together to find solutions that don’t compromise the building. Despite the challenges we’ve had, Sakaw Terrace has seen plenty of steady progress.”

The structural steel is completed and concrete flooring has all been poured, giving Sakaw Terrace its shape and structure. The driveway down to the underground parking lot has been poured and the asphalt that will eventually act as the above ground parking has been laid and is currently being used for construction vehicles to carry in supplies.

Throughout the entire progress of the Sakaw Terrace project so far, Kitlar works to keep in mind who the building is for and why it’s so important to the community. The number of seniors living in the Mill Woods community sits around 20,000 and many are in need of affordable housing options that simply don’t exist right now in the neighbourhood.

“Sakaw Terrace will have 158 units, obviously not enough to address the entire need in the Mill Woods community, but enough to get the ball rolling and start some big conversations about this need that really isn’t exclusive to Edmonton’s south,” says Kitlar. “I’ve yet to go through an Edmonton neighbourhood that wouldn’t benefit with some affordable housing options, be it for seniors or families. The need is so obviously there and hopefully Sakaw Terrace can demonstrate a really good solution to keep addressing this need.”