It’s been just over two years since Ottewell Terrace opened its door in the east end Edmonton neighbourhood. The building added a whole new set of options for seniors living in the area, adding GEF Seniors Housing’s affordable apartments program that sees rent set at 10 to 15 per cent below market value in the area, and set a new standard for how GEF Seniors Housing approached new capital building projects.

“We were already established in the neighbourhood with Ottewell Place lodge and St. Nicholas apartments,” says GEF Seniors Housing CEO Raymond Swonek. “So we knew we wouldn’t encounter any apprehension with affordable housing being built in the area. Rather, what we encountered was a lot of excitement and anticipation for this new building and that drove some really interesting conversations with the community.” 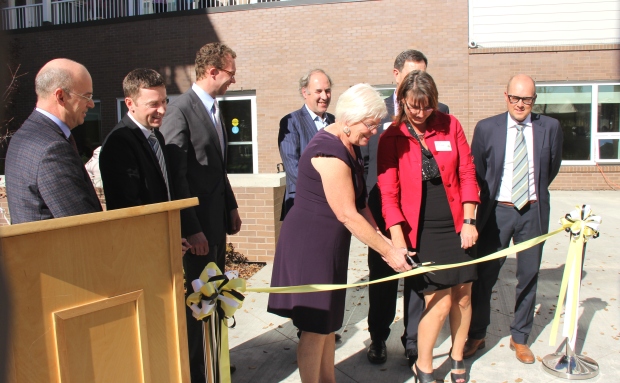 “I was already aware of all the research that had gone into the benefits of intergenerational programming both for seniors and for children,” Swonek says. “The idea of having easy access to this kind of programming was very appealing for both us and for Primrose Place Family Centre. Since moving in, it’s been a highly successful partnership and brought a lot of value not just to the seniors and the children but to the community as a whole.”

It didn’t take long for the 54 suites in Ottewell Terrace to fill up with seniors excited to call the building their new home. For many of the people who moved into Ottewell Terrace, staying in their community was a big deciding factor for where they were going to live. As neighbourhoods in Edmonton age, so do the people who live in them and Swonek explains that when staying in their own homes is no longer safe or suitable for a good quality of life, affordable housing options need to be readily available in the community.

“A big philosophy we live by is aging in community,” says Swonek. “We’re seeing this kind of demand for affordable seniors housing in a lot of neighbourhoods across Edmonton, especially in older communities like Ottewell. People want to stay in their neighbourhoods, stay close to their friends and family, and keep seeing their same doctors and dentists who know them so well. This easily explains why Ottewell Terrace has become one of our most popular buildings for new applicants.”

The view from one of Ottewell Terrace’s balconies.

With the success of Ottewell Terrace, Swonek is looking forward to implementing everything GEF learned from the whole process to new capital projects such as Sakaw Terrace and the new development in Elmwood. One of the biggest reminders he had from the Ottewell Terrace project is how much value affordable housing adds to a community.

“You offer people an affordable place to call home and it immediately changes their lives,” says Swonek. “I think every neighbourhood in Edmonton could benefit from having some affordable housing options. Research time and time again shows that mixed communities are healthier and happier places to live. Ottewell Terrace is just one example of how an affordable housing project can add so much value to a community.”