Deepa Garbaria wrote this opening line to a poem when she moved into her new home at Grace Garden Court. The poem titled “Anxiety” outlines her struggles adjusting to both moving to Edmonton from Montreal and to moving into her new apartment.

“I didn’t like it at first,” Garbaria says with a chuckle as she points out that she moved into the building back in 2001. Needless to say, Grace Garden Court has grown to be Garbaria’s home and has become the centre of much of her poetic expression.

Garbaria discovered her love of writing poetry after she retired from working as a teacher. Originally from Nairobi in Kenya, she landed in Montreal with her husband and three children and eventually got a job teaching at the school on the Kahnawake reserve. She remembers being involved in many different arts programs with the children she taught including directing theatre productions and writing poetry. 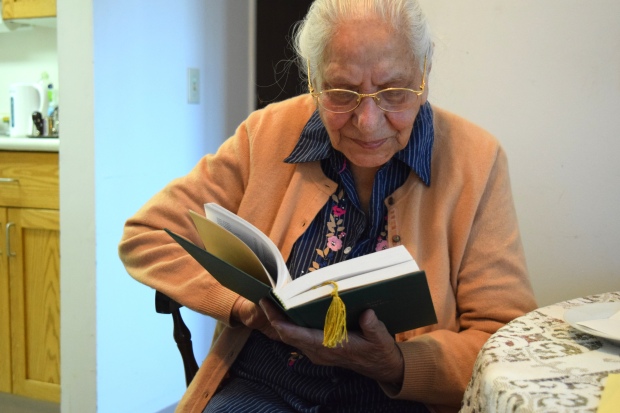 “Some of my former students would go to see my sister because she was an eye doctor,” Garbaria reminisces. “They all remembered me teaching them poetry and would still talk about it.”

As her skills in writing poetry developed, she began taking part in poetry readings throughout the city and even had a collection of poems published by a teacher named Sandra Mooney called Seeking in 2010. In 2016, she decided to submit a poem to a Canada-wide contest with the Victoria, British Columbia, based Poetry Institute of Canada. She received a fourth place prize for her poem Rossington Cottage and her poem was published in the Island Tides anthology along with the other contest winners.

For Garbaria, writing poetry in English provides a special challenge that she finds joy in overcoming. She speaks Punjabi, Hindi, Urdu (all relating back to her relatives who were originally from India), and Swahili (the main language in the African countries she grew up and worked in) along with English.

“Direct translations never work right, so I sometimes struggle to find those right words I need to express what I’m feeling,” says Garbaria. “When I find the words, though, it makes me so happy. But the happiness doesn’t last long and I want to work on the next poem and keep building my self-confidence.”

The topics of Garbaria’s poems range from the spruce tree outside her apartment window to watching nature during the winter time. She even wrote a poem to commemorate former Grace Garden Court building manager Joyce Rebman after she left GEF Seniors Housing. Even at 89 years old, every one of Garbaria’s poems is another opportunity for her to grow.

“I have so much in my brain and it needs to come out,” Garbaria says. “I have so much culture in my background, being Indian heritage, being a part of the British colonies, living in Africa, and now living in Canada. I have seen and experienced so much, countries changing, capitals changing, kingdoms falling, and I have so much to share.”

Garbaria’s life experiences help drive her to continue being creative. As she explains, she gravitates towards poetry because of how far it can reach and how anyone can enjoy it.

“Poetry is so universal,” Garbaria concludes. “Right from the songs and lullabies that a mother would sing to her child, poetry is in every human being.”